I know it's satire, but it hits pretty close to the mark..


Obama Win Causes Obsessive Supporters To Realize How Empty Their Lives Are
1 comment:

The law needs to change.

The law I am speaking about is 'insider trading'.

This week, it came out that the SEC has filed a civil suit against Dallas Maverick owner Mark Cuban for allegedly using inside information to sell stock that prevented a $750,000+ loss.

What was he supposed to do? Just sit on it and take the hit? I thought that was what capitalism was all about.. using what you know to make decisions to generate revenue.

Now.. I'm no stock market genius.. but it seems to me that it would have been pretty irresponsible of him to not make a move to head off a loss of more than 3/4 of a million dollars. I understand to someone worth over 10 figures, you can probably find $750,000 between the cushions of his couch.. but that isn't the point.

Presumably, someone who is in a position to lose that much money has employees. What would have happened if he had not made the sale, and he did in fact lose the money, how many people would have lost their job?

I am not a fan of Martha Stewart, but the same thing happened to her, and she went to jail for it. Ironically, if she had not made that transaction, and just sat on the stock, she would have made more money in the long run.. but that's a story for a different time.

Sometimes, they are just right.

While I was waiting for a flight at JFK, I picked up a copy of Newsday, a newspaper from NYC.

In it, there was an article about a talk given by former Democrat Presidential nominee, Michael Dukakis at Hofstra University. It can be read here.

In it, he calls for an overhaul of the election and primary process.

Dukakis suggests a consolidation of the process to 6 regional votes. The votes would be held 2 per month in February, March and April. He suggested that the votes would rotate each presidential election cycle. The article didn't go into more details than this, so I'm not sure of the finer details.

As far as the regular election process, I think that it might be time to consider an update to the Electoral College process. I know that the Founding Fathers put in the Electoral College for a reason, that the people then weren't as educated on the candidates as the delegates are, and that they would not be able to make accurate decisions. This may not be far off from the process today, but the reason for the lack of education is different now, than back then. Technology is a key in this. People can be educated, many choose not to.

We need not completely abandon the Electoral College, but I think it should evolve. As it stands now, each state gets as many electoral votes as members of federal representatives (2 Senators and as many Congress as the population calls for), so each state gets at least 3 votes. Every vote a state gets, goes to the party of the majority of the voters.

Here is my suggestion: break down the delegate votes should be divided by Congressional District rather than states. If a Congressional District votes different than the entire state, the votes of that district don't really count. Especially if there are districts that have much larger populations. For example, in NY, in a state of around 20 million population (enough to earn 31 electoral college votes), nearly 1/2 (around 8.2 million) of the population live in New York City. If you count the population center, the number goes up. The NYC market is nearly 19 million by itself (if you count those living in NY, NJ and PA), and over 12.3 million in just the state of New York. More than half of the population of the state is in one market. Nearly 2/3rds (18 of 29) of Congressional districts are 'Downstate'.

Instead of it being an 'all or nothing' process for the electoral college votes, how about giving each congressional district 1 vote, and let the remaining 2 votes for each state, go to the states overall winner.

This way would give us a more representative view of the views of population of the Country. 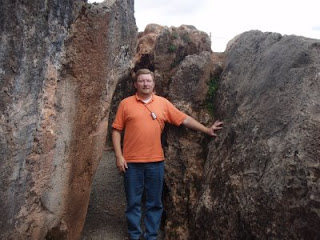 This is one of around 700 pictures I have taken on my trip to Peru. When I am back in the States, I´ll upload more. They will probably be at shutterfly.com, I´ll post a link here when they are up.
No comments: